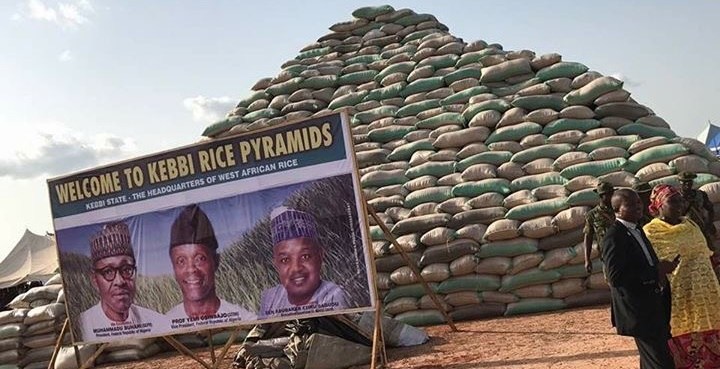 Fayose became the Governor of Ekiti state in 2014 while Baguda became Governor of Kebbi state in 2015, while Baguda took N4bn to BOI, got counter funding and got 78,000 people cultivating rice (employment), my own governor Fayose took N4.7b to build the first flyover in Ekiti state, while the farmers in Kebbi have sold their rice to Lagos state (LAKE RICE) and have moved on to increasing their farm size, my Governor decided to throw money at a project that won’t provide a single sustainable job.

When operational, it is expected to generate direct and indirect employment for 3,500 people and its procurement will reach out to 50,000 farmers my own Governor Fayose has approved the construction of another governor’s office, another high court, reconstruction of the road to
his village (even though its next to mine) for several billions of naira.

Kebbi state is not owing any salary and the state government didn’t blame it on PMB whereas Ekiti is owing pensioners as much as 11months while civil servants have 7 months unpaid salaries.

The difference between these Governors is called good governance with the people at the centre of it. If you think Fayose is your best Governor because he gives people 1kg of rice plus N500, you need to have your head examined especially if you are from Ekiti state, for those of you that are not from Ekiti state and assume Fayose is the best governor because he insults PMB, you are part of the larger problem, please go to your state and compare your Governor with Kebbi state Governor, after that, come back and make your comment.

Remember, Fayose is also the one who once said he wanted to contest for Presidency. With what I just showed above, he cannot even contest and win against the kebbi state governor not to even mention PMB.

NOTE – Baguda inherited N83bn debt from the previous government, he didn’t blame it on the past government.


Thank you for visiting us, We hope and long to see more of your visit again… Hope you enjoyed your visit?