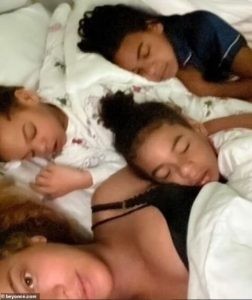 The 40-year-old singer also shared a sweet snap of daughter Blue Ivy, 10, and five-year-old twins Rumi and Sir sleeping beside her in bed.

American singer, songwriter and actress, Beyonce has shared an adorable photo of her three kids with husband Jay-Z ahead of the release of her new album Renaissance.

In a post published to her official website on Thursday night, the 40-year-old singer also shared a sweet snap of daughter Blue Ivy, 10, and five-year-old twins Rumi and Sir sleeping beside her in bed.

In the post, Beyonce thanked her kids, husband, and other close family members for giving her the ‘space, creativity, and inspiration’ she needed to create her latest work.

The album will be made available to purchase and/or stream at midnight EST on Friday, July 29.

‘This three-act project was recorded over three years during the pandemic. A time to be still, but also a time I found to be the most creative,’
she penned Thursday ahead of the release.