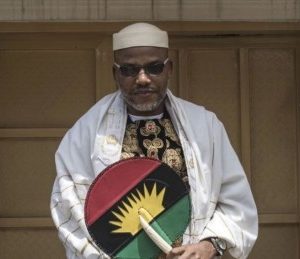 The apex Igbo socio-cultural organization, Ohanaeze Ndigbo, has warned the administration of President Muhammadu Buhari that the detained leader of the Indigenous Peoples of Biafra (IPOB), Nnamdi Kanu, must not die in the custody of the Department of State Services (DSS).

The spokesman of Ohanaeze, Dr Alex Ogbonnia, gave this warning on Tuesday in a statement titled ‘Nnamdi Kanu must not die in prison.’

We had reported that Ifeanyi Ejiofor, the lawyer to the IPOB leader, said Kanu has been diagnosed with gastrointestinal disorder following persistent heartburn.

‘The attention of the Ohanaeze Ndigbo Worldwide has been drawn to the deteriorating health of the Leader of the Independent Peoples of Biafra (IPOB), Mazi Nnamdi Kanu.

“Information reaching us indicates that ‘Nnamdi Kanu is currently suffering from gastrointestinal illness, which necessitates the constant use of antacids and other available medical treatments.’”

“It adds that ‘the DSS has refused to allow him have even the smallest amount of the prescribed painkiller, which could have given him short-term respite.

“Report from Ifeanyi Ejiofor, the IPOB’s attorney, further adds that ‘the DSS has repeatedly treated the existing court order—which specifically directed that Nnamdi Kanu should be granted access to his doctor for an independent review/investigation of his current health status—with the utmost contempt and disdain.”

The above report should be very worrisome to any fair-minded patriotic Nigerian, the fair-minded and patriotic because it is self-evident that the Nnamdi Kanu phenomenon is a product of circumstances.

“The Governor of Sokoto State, Alhaji Aminu Waziri Tambuwal in a humane and patriotic candour stated that “the marginalisation of the South-East geopolitical zone by the Federal Government of Nigeria under President Muhammadu Buhari is crazy and unprecedented.