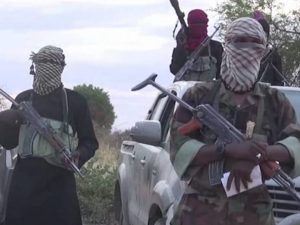 30 soldiers are also reportedly missing in the dastardly attack lunched on Nigeria troops at the remote northern town in Yobe.

However, the Nigerian Army has dismissed reports that some soldiers were killed in the attack.

An eyewitness, Modu Lawan, said the insurgents who dressed in military attire, stormed the village with seven Hilux vans on Saturday.

“We thought they were soldiers because everything about them was like soldiers – their dressing and vehicles. They passed through the town but did not touch anybody. They went straight to the military base and we started hearing serious gunshots,” Lawan said.

The Chairman of Yunusari local government area, Hon. Ali Yerima, could not confirm the casualty figure in the attack.