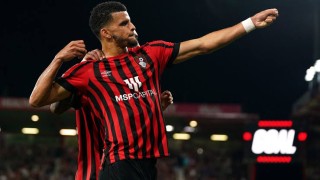 Bournemouth head coach Scott Parker has praised forward Dominic Solanke’s for his impressive displays this season and urged him to improve even more.

Solanke has bagged 22 goals from 35 appearances in the Championship this season.

Bournemouth are second in the Championship with 66 points from 35 games.

After the 1-1draw with Reading, Solanke told the Daily Echo that he was loving his football and looked forward to leading the line for the rest of the campaign.

“I’ve not heard those comments, but I won’t expect anything else from Dominic Solanke,” Bournemouthecho.co.uk quoted Parker.

“I think I’ve said that many times.

“He gives me constantly a feeling and an impression that he’s a boy that wants to improve, he’s dedicated to his craft, and he doesn’t want to miss football matches.

“He wants to keep driving and keep pushing, really.

“And for me, that’s a massive ingredient.

” All the best players and the ones that are successful often have that.

“So not by fluke, not by luck,is Dom sitting on the amount of goals he scored this year.

“He’s a large focal point of that, really I’ve just been pleased with him.

“And eleven games left,now he needs to continue in that and I don’t see how he won’t.

“I see exactly the same consistent person I’ve see since I walked in here really.”