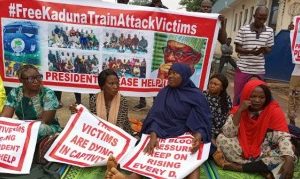 Family members of kidnapped train victims have protested at the Ministry of Transportation on Monday.

The protesters demanded the release of their family members in the den of kidnappers.

This came after the terrorists released a video where the male victims were being mercilessly flogged.

The families who have been at the ministry since 6 am said they were there to express their frustration over the continued stay of those in captivity.

They vowed not to leave until they were assured of the return of their loved ones.