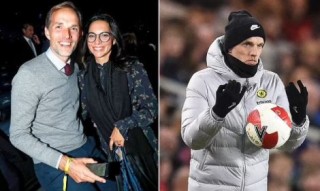 The marriage of Chelsea manager, Thomas Tuchel has ended, the Daily Mail reports.

It is understood that close friends claim that “all avenues are exhausted” as it concerns a possible reconciliation.

“Sissi and Thomas have tried to avoid splitting but in the end there was no other way.

“It is very sad and now it is all about making sure their daughters are the top priority. Papers were lodged last week to get the divorce under way,” a source said.

Just 10 months ago, Sissi was seen running across the pitch at Porto’s Estadio do Dragao, before jumping into her husband’s arms after Chelsea beat Manchester City 1-0 in the Champions League final.

His wife gave up her job at the German newspaper, Süddeutsche Zeitung to bring up their family, so may be entitled to a slice of his future earnings, as well as up to half of his current fortune.