Bukola Saraki Plays Down Fears Of Wike Defecting To APC 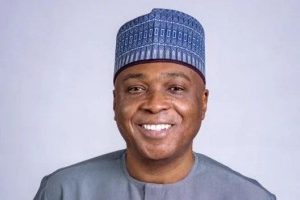 Dr Abubakar Bukola Saraki, the national leader of the Peoples Democratic Party, PDP, has played down the rumours of planned defection by the Rivers State Governor, Nyesom Wike to the ruling All Progressives Congress, APC, Daily Post reports.

Recall that three APC serving governors reportedly visited Wike recently in the bid to woo him into the ruling party following his rejection as the running mate of the PDP presidential candidate, Alhaji Atiku Abubakar.

Saraki at a media interactive session with journalists in Ilorin on Friday dismissed the fear that Wike may dump the PDP for the APC.

He expressed confidence that the party will resolve its internal crisis very soon and get ready for the 2023 general elections battle.

The former Senate President, who condemned the ruling APC government for poor performance in education, economy, security, and health sectors, declared that “there will be a colossal mistake to say APC should be the party Nigerians must vote for in 2023.”

“What Nigerians should focus now is engaging with the PDP on how we can rebuild this country and put it in the right direction, that is the solution to the hydra-headed challenges now confronting the country,” Saraki added.

He recalled that in 2019, “some of us came out to say clearly that APC should not be given a second term,” adding that “the present APC government is not giving the desired hope going by their utterances and actions.

“What is important now is to galvanize Nigerians to say ‘a clear No’ to the APC because the party has failed.

“Every day, we see events that confirm that they have failed, events that have never happened in the history of this country.”

He criticised the state of infrastructural development in the state, questioning the current administration’s achievements in the last three years.

Saraki noted that no new projects have been completed or commissioned since the previous government left office in 2019.

According to him, “all promises made in 2019 have not been delivered to the people.”

He admonished journalists to always be on the right side of history.

“It is good and it pays to be on the right side of history,” he said.