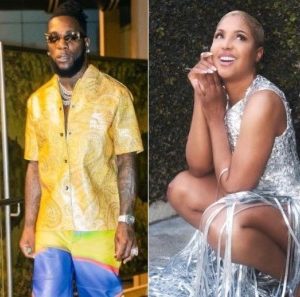 Burna Boy, the Grammy award winning Nigerian singer, has made a new revelation about his hit single, Last Last.

The singer revealed that American singer, Toni Braxton, gets 60 per cent of revenue the song.

In his latest interview with the Million Dollar Worth of Game podcast, aired on Sunday, Burna Boy revealed that it was his idea to sample her music.

He said, “It was actually my idea to be honest.

I just wanted to use that sample and I knew Chopstix could do something crazy with it. I just pointed that sh*t out and he took it from there. That’s one of the most creative processes ever.

“But she is taking 60 per cent of the sh*t. I’m not complaining. Hopefully, she even comes out to one of the shows.”