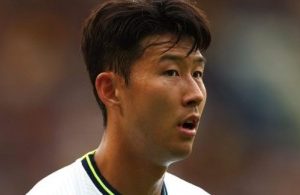 Chelsea are investigating possible racist abuse towards South Korea’s Heung-Min Son during the 2-2 draw with Tottenham on Sunday.

The incident occurred as Son took a corner in front of the Shed End.

The Athletic reports that Chelsea are aware of a video which appears to show a supporter aiming a racist gesture at the South Korean.

It is understood the Blues are probing the footage to identify the supporter.

In 2019, a West Ham fan was fined for racially abusing the Spurs forward during a Carabao Cup tie.

Meanwhile, Chelsea manager Thomas Tuchel is under an FA investigation after post-match comments made about referee Anthony Taylor.

The Blues boss questioned whether Taylor should officiate Chelsea games after Spurs were allowed to score two controversial goals.

Both Tuchel and Tottenham manager Antonio Conte have been charged by the FA after receiving red cards for clashing on the touchline during the fiery encounter.

Conte and Tuchel will likely take charge of their teams this weekend though as suspensions are not automatic.