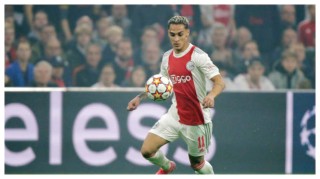 Chelsea and Manchester United will have to slug it out for the signature of exciting Ajax winger Antony as both Premier League clubs prepare to strengthen ahead of next season. Antony surprisingly has become an influential player for the Dutch Champions as he presently has 11 goals registered this season alongside 8 assists.

According to a report via The Sun, Ajax manager, Erik ten Hag admitted earlier this season that it would be difficult to keep his star man.

“From a sporting point of view, it is clear that he is an incredible talent. He is going through an incredibly beautiful development.

“Especially if we perform in the Champions League, then it is clear that he will come into the spotlight and be interesting for a lot of clubs.”

Antony will fancy a move to the English Premier League despite reports confirming teams in Spain and Italy have also shown interest in the Brazilian winger.

Meanwhile, Chelsea are planning on raiding Italian Club, AS Roma for Tammy Abraham, a striker they let go of last season. The Blues made the big decision in the summer to offload their academy graduate to Jose Mourinho in favour of using the £34million plus more to re-sign Lukaku. According to Football London, The Blues have now been backed to re-sign Abraham for £68million in the future.