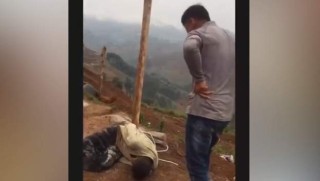 A Rwandan court has sentenced a Chinese national for torture after a video showed him beating men tied to a tree.

The court on Tuesday sentenced Sun Shujun to 20 years in prison, a journalist who attended the court session told the BBC.

A Rwandan man said to be his employee was also sentenced to 12 years in jail for abetting torture.

The victims are reported to have been former workers at a mine operated by Shujun in Rutsiro district and who were allegedly linked to theft.

Shujun said he had previously warned thieves after his belongings were repeatedly stolen.

In August 2021, the three-minute video went viral in Rwanda and led to the arrest of Shujun – who was later released on bail.

The video was taken by angry workers and shared on social media.

Witnesses told the court that Shujun had erected a cross where those suspected of stealing from him were tied and whipped.