A Chinese aircraft carrier sailed through the sensitive Taiwan Strait on Friday, Taiwan’s Defence Ministry said, just hours before the Chinese and U.S. presidents were due to talk. 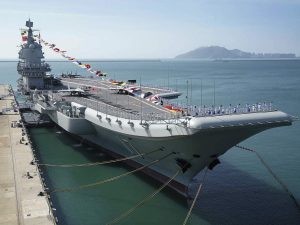 China claims democratically ruled Taiwan as its own territory, and has over the past two years stepped up its military activity near the island to assert its sovereignty claims, alarming Taipei and Washington.

A source with direct knowledge of the matter, who was not authorised to speak to the media and spoke on condition of anonymity, told Reuters the carrier Shandong sailed close to the Taiwan-controlled island of Kinmen, which sits directly opposite the Chinese city of Xiamen.

“Around 10:30 a.m. the CV-17 appeared around 30 nautical miles to the southwest of Kinmen, and was photographed by a passenger on a civilian flight,” the source said, referring to the Shandong’s official service number.

The USS Ralph Johnson, an Arleigh Burke guided missile destroyer, shadowed the carrier at least partly on its route. The Shandong did not have aircraft on its deck and sailed north through the strait, the source added.

Taiwan also sent warships to keep an eye on the situation, the source said.

Taiwan’s Defence Ministry, in a brief statement, confirmed the passage of the Shandong but gave no details other than to say its forces have a “full grasp” of what China’s ships and aircraft do in the Taiwan Strait.

Chinese Foreign ministry spokesman Zhao Lijian referred questions to the Defence Ministry – which did not respond to a request for comment – but said the Shandong has a “routine training schedule”.

“We should not associate this with the communication between the heads of state of China and the United States. You may think it is too sensitive. What is sensitive is you, not the Taiwan Strait,” Zhao told reporters in Beijing.

The sailing happened about 12 hours before U.S. President Joe Biden is due to speak to his Chinese counterpart, Xi Jinping. read more

The source described the timing of the Shandong’s movement so close to that call as “provocative” and that it was unusual it sailed during daylight hours, with previous missions happening at night.

Last April, China’s navy said a carrier group, lead by the Liaoning, the country’s first aircraft carrier put into active service, was carrying out routine drills in the waters near Taiwan. read more

Taiwan is already in a heightened state of alert due to the Ukraine war, wary of China taking advantage of the situation to make a move of its own, though there have been no signs Beijing is about to mount any kind of military strike.

Lo Chih-cheng, a senior lawmaker from Taiwan’s ruling Democratic Progressive Party called the Shandong’s transit a “very provocative message” when countries in the region are already alarmed by the war in Ukraine and hours before the Biden-Xi call.

“Tensions across the Taiwan Strait won’t rise sharply because of this, but it will likely cause neighbouring countries to raise their military alert level,” he told Reuters.

China says Taiwan is the most sensitive and important issue in its relations with the United States. Washington has no formal diplomatic ties with Taipei, but is Taiwan’s most important international backer and arms supplier.

Taiwan rejects China’s sovereignty claims and has repeatedly vows to defend its freedom and democracy.

Kuo Yu-jen, a security expert at Taiwan’s National Sun Yat-sen University, said the Shandong was likely to be on its way up to northern China for next month’s celebrations marking the founding of China’s navy.

“It was carrying no aircraft and had no frigates” accompanying, he added.

The Shandong is China’s newest aircraft carrier, commissioned in 2019.

In December 2019, shortly before presidential and parliamentary elections in Taiwan, it sailed through the Taiwan Strait, a move condemned by Taiwan as attempted intimidation.