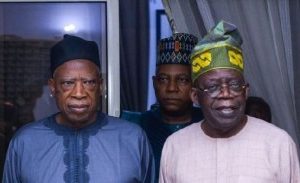 WEEKS after the All Progressives Congress (APC) standard-bearer, Senator Bola Tinubu, secured the cooperation of the governors on the composition of the Presidential Campaign Council (PCC), another cold war is brewing over the establishment of what has been perceived as a parallel body, the Grassroot Independent Campaign Council.

Sunday Tribune investigation revealed that the governors who were enraged over the list of members of the PCC which they said was skewed against their interest were eventually pacified after several trouble-shooting meetings with Tinubu.

The APC presidential candidate also met with the leadership of the APC National Working Committee led by Senator Abdullahi Adamu, which also felt shortchanged before a new list was released to accommodate all contending blocs.

A source told Sunday Tribune that Tinubu had since created a new organ called the Grassroot Independent Campaign Council with trusted loyalists as chairmen in state chapters.

Members of the ICC are insulated from the influence of the governors as they are not answerable to them.

The source revealed that members of the ICC with temporary operational office in Maitama, Abuja has since moved to a new office near the Federal Secretariat in the Federal Capital Territory. They were inaugurated penultimate week.

“The governors have been angry since they got wind of the composition of the ICC. Because the new body does not enjoy their buy-in, their inauguration was low key. “Members were invited for a retreat but some of them knew it was actually their inauguration.”

Speaking to Sunday Tribune in a telephone interview, Bayo Onanuga, Director, Media and Publicity, APC Presidential Campaign Council, however, said no governor has expressed reservation over the establishment of the ICC.

He said: “That isn’t true. No governor is complaining; no governor has come out to complain. It is mere rumour. That’s mere invention.”

Minister of Labour and Employment, Festus Keyamo, (SAN) who is the Director of Public Affairs/ chief spokesperson, Tinubu– Shettima Presidential Campaign Council, also said there is no cold war between Tinubu and the governors over the creation of ICC.

He said, “There is no single governor that is unhappy about this. Politics is a game of numbers. The more we have volunteers, the better for us.”

A party source, however, told Sunday Tribune in confidence that the APC standard-bearer is wary of the half-hearted commitment of certain governors from the North to his aspiration which informed his endorsement of the ICC when it was raised with him.

The source told Sunday Tribune that one of the APC governors in the North-East state “is romancing the Atiku camp and Tinubu has got wind of the moves of the unfriendly governor.”

The source revealed that a former National Security Adviser from North-West has been mobilising support for Atiku Abubakar among governors in the North including those of the APC.

“They are reaching out to the Northern governors, particularly to those from the North-West and the North-East. The message is that Atiku Abubakar is their own and he must not be left in the cold.”