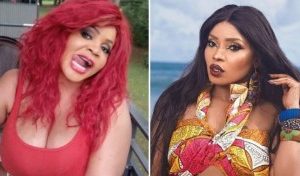 Gist lover, a blogger had shared the shocking news on social media alleging that Abubakar had an affair with the man of God.

The blogger further claimed that it was the reason Abubakar went through unknown ailment that nearly took her life.

Reacting in a series of posts on her Instagram, Orjiakor said what Abubakar is facing is karma.

According to Orjiakor, Abubakar and her then lover were responsible for fake viral reports of her allegedly engaging in coitus with a dog.

Orjiakor also shared videos and posts mocking Abubakar over her recent predicament, revealing the real reason she’s angry with her.

“Well this was written by person who claim say them use am for rituals…… aunty still get power to talks…… yes you tried your best to finish me …… but then you forgot I was already a landlady before you strike …… it was slow but what am worth now will make you sit down in your rat hole….. shey u done sell your house that is if u actually had one,” she wrote.

“Like I said my left breast is richer than you and your generation … anyway It’s all about post and delete. Deleting you because ur just a broke infected girl looking for how to make money from whoever. Superman likes women but juju…….:. That’s a fucking lie. If them use u them go done press the remote make burst that ur useless swollen stomach ….i no wan see you for any blog i dey follow . If I see u drag anyone i dey come for you.”

She also lashed out at Shan George for denying dating the pastor.