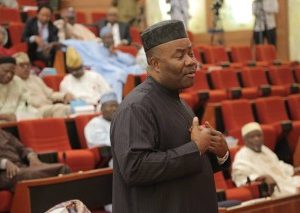 The Independent National Electoral Commission (INEC) has been directed by a federal high court in Abuja to recognise and publish the name of Godswill Akpabio as the All Progressives Congress (APC) candidate for the Akwa Ibom north-west senatorial district in 2023.

Lawan, Umahi, and Akpabio were allegedly left off of the INEC list, nevertheless.

The former minister entered the contest for the party’s presidential nomination but abandoned it in favor of another contender.

Ekperikpe Ekpo won a parallel primary election that was also held, but it was later canceled due to irregularities. According to reports, Akpabio won the competition after a rerun on June 8.

Festus Okoye, the INEC spokesperson, commented on the situation involving the INEC list and stated that the commission is not required to publish the names of candidates submitted by political parties if there are doubts regarding the legitimacy of primaries featuring such individuals.

As a result, the APC and Akpabio went to court to ask for redress.

In his ruling on Thursday, Judge Emeka Nwite stated that even though the APC had identified Akpabio as one of its candidates, INEC had broken the law by refusing to approve and publish his name.

“I hereby declared that the defendant (INEC) publish the name of the 2nd plaintiff (Akpabio as the authentic candidate,” the judge ordered.