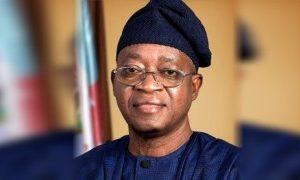 The Abuja Division of the Federal High Court is to deliver judgment in a suit seeking the disqualification of Governor Adegboyega Oyetola as the All Progressives Congress (APC) candidate in the July 16 governorship election holding in the state.

Justice Inyang Ekwo fixed July 14 after counsels for the parties in the suit adopted their processes and presented their arguments.

An APC chieftain, Moshood Adeoti, the plaintiff in the suit, filed the matter through his legal team led by Chiesonu Okpoko, SAN.

In the suit, the plaintiff listed the APC, Mr Oyetola and Independent National Electoral Commission (INEC) as first, second and third defendants.

Mr Adeoti, who was an aspirant in the APC governorship primary, in the originating summons filed February 23, prayed the court to nullify Mr Oyetola’s candidacy because he (Oyetola) contested in the poll as a member of the party’s caretaker committee.

He argued that the state’s incumbent governor ought to have resigned his membership in APC’s CECPC and left office at least 30 days before the primary election.

Upon resumption of the matter on Wednesday, Mr Adeoti’s counsel, Mahmud Adesina, SAN, informed that the matter was adjourned for hearing and that he was ready to proceed with the case.

The judge then directed lawyers to the parties to adopt their processes and argued their case.

Dr A. I . Layonu, the lawyer to the APC, argued that Oyetola tendered his resignation letter to the APC as a member of its committee on January 19 and that the party acknowledged its receipt.

Mr Jolaolu urged the court to dismiss the suit as lacking merit and an exercise in futility.

He reemphasised that the governor resigned before the day the primary poll was conducted.

Bashir Abubakar, who appeared for INEC, said though the commission filed a counter-affidavit and a written address, he said he left the outcome of the case to the decision of the court.

But counsel for the plaintiff, Mr Adesina, said “the stories of the first defendant (APC) are misleading and confusing.”