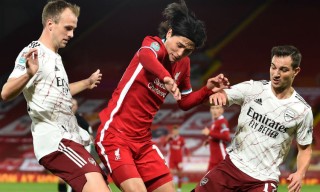 Liverpool’s Carabao Cup semi-final, first-leg fixture with Arsenal on Thursday has been postponed.

Liverpool’s submission to have the fixture rescheduled has been approved by the EFL due to the increasing number of suspected positive COVID-19 cases among the Reds’ players and staff.

Jurgen Klopp’s side confirmed this in a statement via their website on Wednesday afternoon.

The latest round of testing on Tuesday returned a significant number of positives, including Pepijn Lijnders, who was due to take charge of Liverpool at Emirates Stadium.

The outbreak has left Liverpool without a sufficient number of players and staff to fulfill the contest as originally scheduled.

As a result, the first leg of the last-four encounter will now be played at Anfield on Thursday January 13, kick-off 7.45pm GMT.

The return will take place at Emirates Stadium on Thursday January 20, also getting under way at 7.45pm.