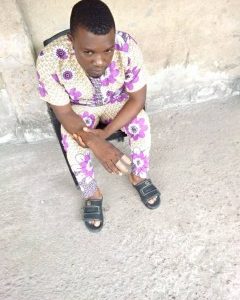 Here Is The Story, As Gathered By NaijaFinix:

Three boys use their bike, while My Brother By The Name Felix, From Benue State, was working down to his house, they stopped Him And They wanted to collect his phone.

He Drag with them, one was having Sharp knife, one pistol, one small axe, But When he refuse to surrender his phone, they wounded him in his two hands, with the sharp knife, hit the Axe On his back because of the Thick Cloth, he wore on the day of the incident, so it couldn’t penetrate inside his body.

The Injury Affected his tendons and veins and it was Reportedly Damaged.

NaijaFinix Is Thereby, Calling On The Nigerian Police Force, Nigerian Army, DSS And Other Security Agencies To Sit Up To Their Task.