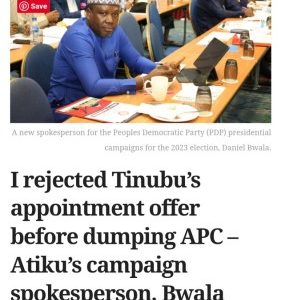 Mr Bwala, with Dino Melaye, was on Thursday appointed as spokespersons for the PDP presidential candidate, Atiku Abubakar, in the lead-up to the 2023 elections. His appointment came barely a week after his defection from the APC to the PDP.

Speaking on Channels Television hours after his appointment was announced on Thursday, Mr Bwala dismissed the claim that he left the APC to get an appointment from Atiku. Contrary to the claim, Mr Bwala said the APC presidential candidate, Mr Tinubu, had already given him an assurance to appoint him his spokesperson before dumping the APC.

“Somebody said that ‘he left because he wanted an appointment with Atiku’. What they don’t know is that I left an appointment already guaranteed for me by the flagbearer of APC, Bola Ahmed Tinubu, as his presidential spokesman. These were his promises to meet directly, personally in his car,” he said.

He said Mr Tinubu’s was that significant “that even governors could not extract such commitment from him. I came from a comfort position or the sort of comfort by taking that decision,” Mr Bwala said, adding that he has prominent persons within the party to confirm his claim.

He said he risked losing a lot in terms of economic gain by leaving the APC but his decision was informed by the deed to satisfy his conscience and principles.

He said President Muhammadu Buhari-led administration has done too much damage to the country to allow any successor from his party in the 2023 general elections.

“The whole world is looking at Nigeria. This is going to be the eighth year of APC. No excuses, no longer the doctrine or rhetorics of when we came we met this, we inherited that.

“Even if you join the university as a part one student, you will know that after eight years you are expected to be a medical doctor. If you join the department as a law student, within eight years, you’re fully qualified to practice as a lawyer.

“Eight years is enough for any administration, even if you are starting from scratch to be able to bring the full achievement of what you intend to do. Unfortunately, after getting to eight years now, the question Nigerians will ask themselves now is ‘has APC taken us further or backwards?’,” Mr Bwala noted.

Before his defection to the PDP last week Friday, the former APC chieftain was among notable vocal critics of the PDP.

He also described the APC’s Muslim-Muslim presidential ticket as a display of hypocrisy which will not sell in the 2023 poll.

Mr Bwala argued that if the party’s decision was truly informed by its quest for competence, the Kaduna State Governor, Nasir El-Rufai, should have been nominated as the VP given his contributions to the party in the previous elections.

“Isn’t it intriguing that two days ago, three days ago, you saw one of them, the national chairman of APC, in a church, shouting ‘praise to the Lord!’, ‘Hallelujah!’?

“If they think the Christians wouldn’t matter, why are they all over the churches? They packaged bishops and it backfired. Now they have become bishops themselves and they go to churches to win the votes of the people.

“They were trying to disenfranchise 80 million Nigerians and they said that it is not religious politics. It is not identity politics. It is people who are overthinking and I did a video a clip sometimes back on the audacity of hypocrisy and hypocrisy of competence. When they floated this idea of competence and they said that was the basis,” Mr Bwala said.

He vouched for the personality of Mr Atiku across ethnoreligious barriers and projected victory for the PDP in the coming elections.