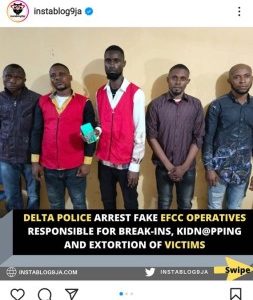 The police in Delta State have arrested five persons claiming to be operatives of the Economic and Financial Crimes Commission (EFCC) which they have been using to defraud unsuspecting members of the public.

The suspects who are based in Asaba, Owerri, Port Harcourt and Lagos, include: Prince Allison (29), George Chisom Onyeweagu (29), Duke Okoro (40), Joseph Osinachi (23) and Onyocha Stanley (32).

Confirming their arrest on Friday morning, Spokesperson of the Delta State Police Command, DSP Bright Edafe said the breakthrough was made through a sting operation by operatives of the Decoy Squad of the command.

He said the operatives acted on credible information, and trailed the suspects to their hideout at a hotel in Asaba where they hibernate to plan their next operation.

He said, “The suspects have admitted to have robbed different victims from various parts of the state, they also stated that they sometimes lodged their victims in a hotel for days until they succeed in extorting huge sum of money from them or force them to transfer money into their mobile POS.

Six of their victims have also identified them, one of their victims stated that his house was stormed at night by the syndicate. They gained entrance into the compound by scaling the fence, broke into his apartment, forcefully abducted and took him away in a white Toyota Hiace bus. They forcefully collected his phones from him, other valuables worth three million, seven hundred thousand Naira (N3,700,000), made cash transfer of two million, five hundred thousand Naira (N2,500,00) and told him that they will come for him again.

Five other victims also reported to the Command and made statements of how they were robbed of about fifteen million Naira (N15,000,000). Their white operational Hummer bus, two locally manufactured EFCC jackets, a POS machine and eight mobile phones were recovered from them. Manhunt for the other fleeing members of the gang is ongoing.”