Football fans are claiming that Lionel Messi predicted his country’s defeat after showing signs of serious stress ahead of Argentina’s World Cup clash with Croatia. BBC cameras filmed the Argentina team as the country’s national anthem was played to the crowd ahead of the group game.

Many of the players looked into the distance, focused on the job at hand, but Messi appeared to be suffering with a headache. He rubbed his forehead vigorously as the camera lingered on him with a look of concern etched on his face.

Messi has been down in the dumps ever since his penalty miss in Argentina’s 1-1 draw with Iceland in their opening World Cup group game.

Meanwhile, Lionel Messi has been urged to retire from international duty with Argentina for the second time after his team’s dismal showing against Croatia. The Barcelona superstar was totally anonymous as once again the blue and white stripes failed to impress on the big stage.

Goals from Ante Rebic, Luka Modric and Ivan Rakitic sealed a deserved 3-0 win for Croatia, leaving Argentina needing a minor miracle to get through the group stages. 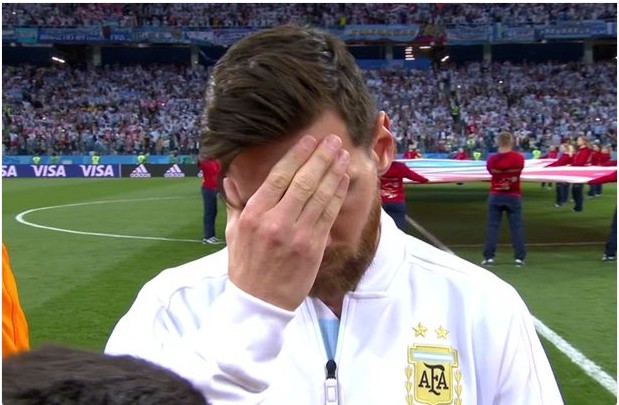