The drama started after Tonto shared a video of Kpokpogri twerking which she claimed depicted her mood. 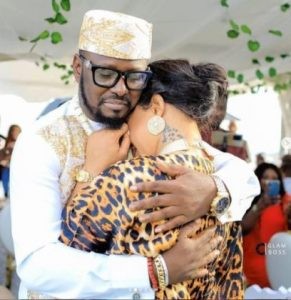 Following months of truce, Nigerian Actress, Tonto Dikeh has resumed hostilities with ex-lover, Prince Kpokpogri as the duo rained insults on each other over the weekend.

The whole drama all started after Tonto shared a video of Kpokpogri twerking.

According to her, the video depicted her mood.

Following the incident, fans took to her page to congratulate her thinking that she had reunited with her ex.

However, Tonto debunked the reconciliation rumours as she stated that she was disappointed at the fans for lacking faith in her.

Moments later, Prince Kpokpogri took to his Instagram story and revealed that he doesn’t shy away when he sees one as much as he doesn’t like trouble.

In his cryptic post, Prince Kpokpogri urged a lady to make peace with God for all the dirty life she had lived and free herself from apparent depression.

According to him, the lady has slept with people’s husbands and snatched other people’s boyfriends. 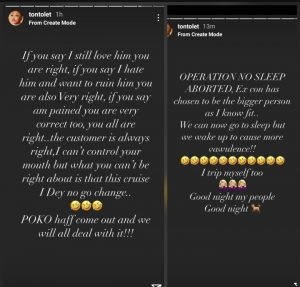