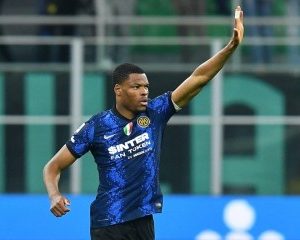 Inter Milan’s Denzel Dumfries is set for a shock move to Manchester United this summer.

Man United are keen on Dumfries, however, and will attempt to sign him if they can offload Wan-Bissaka, according to Gazzetta dello Sport.

Dumfries signed for Inter Milan last summer and has three years left to run on his contract.

But the Serie A giants are open to selling him and included him in negotiations to sign Romelu Lukaku – but Chelsea said no.

Inter Milan are said to be open to offers and value Dumfries at £34million.

However, it is not clear whether Man United would be able to pay in installments.

Dumfries, a Netherlands international, often operates as a right wing-back for club and country, so he would be a useful addition for Man United manager, Erik ten Hag.