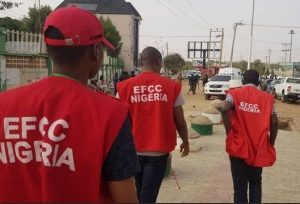 Six suspected internet fraudsters have been arrested by operatives of the Economic and Financial Crimes Commission, Benin Zonal Command.

They were arrested in Benin City, Edo State.

The anti-graft agency made this known in a statement on Friday.

They were arrested at their hideout based on actionable intelligence on their alleged criminal activities.

The agency added that the suspects have made useful statements and will be arraigned in court soon.