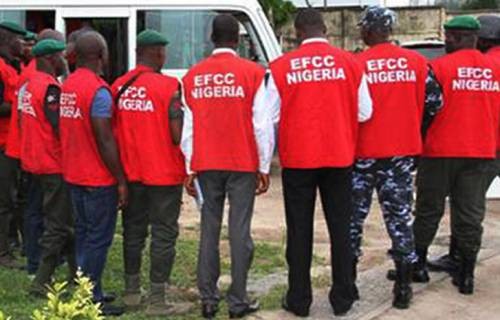 The Economic and Financial Crimes Commission (EFCC) has denied carrying out a raid on the headquarters of Standard Chartered Bank in Lagos today Friday, September 14th.

A statement released by the commission, says there was no raid on the bank by its officers. The commission in its statement said the raid by operatives purportedly wearing the jackets of the Commission might have been the handiwork of errant officers who acted without authorization.

The agency said the action is in flagrant violation of the standard operation procedures of the Commission as it is not the style of the EFCC to openly raid the offices of banks and other financial institutions.

Officials of such institutions who are wanted by the commission, are usually invited for questioning after discreet investigation. Over the years, banks have been cooperative in releasing their officers to the Commission for questioning.

The Commission will investigate the circumstances leading to this illegal raid by errant officers and those found culpable would be subjected to the internal disciplinary mechanism of the Commission.

EFCC again reassures Nigerians that it is an agency which adheres strictly to the rule of law and will, as much as possible, avoid draconian measures in its fight against corruption” he said