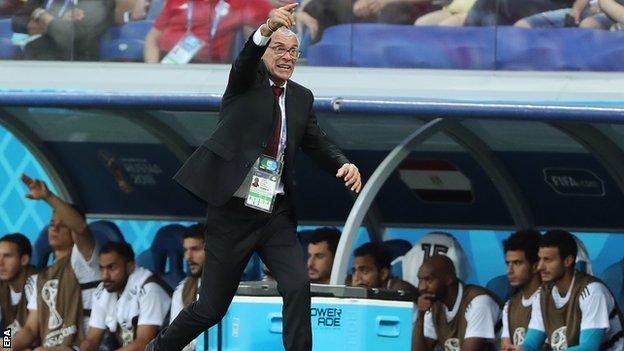 Hector Cuper has left his role as Egypt manager after they were knocked out of the World Cup at the group stage.

Egypt, appearing at their first World Cup finals for 28 years, finished bottom of Group A and failed to pick up a point.

A 1-0 defeat by Uruguay was followed by 3-1 loss to Russia and ended with Monday’s 2-1 defeat by Saudi Arabia.

Their build-up and tournament was dominated by a shoulder injury to star player Mohamed Salah.

Argentine Cuper, 62, would have been out of contract after the World Cup, but had been in negotiation with the Egypt Football Association (EFA) before the tournament started.

Speaking after the Saudia Arabia loss, he said he would “see what will happen” ahead of a meeting with the EFA.

The EFA said: “We held a meeting after returning from Russia and the entire board decided to say thank you to Cuper and his technical staff.

“We appreciate the work from the coach, from reaching the Africa Cup of Nations after three years of absence and taking Egypt to the World Cup after 28 years of absence.”

Former Valencia and Inter Milan boss Cuper was appointed in March 2015 and led Egypt to the final of the Africa Cup of Nations in 2017, where they lost to Cameroon.

Liverpool winger Salah injured his shoulder in the Champions League finallast month and faced a race against time to be fit for the tournament.

He missed Egypt’s first game against Uruguay but returned to play against Russia, scoring from the penalty spot, and found the net again on Monday against Saudi Arabia.

The Egyptian FA has said there was “no problem” with Salah amid reports the forward could be set to quit the national team.