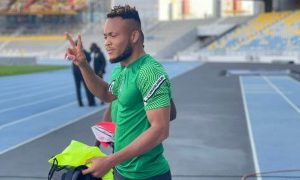 Nigerian winger, Chidera Ejuke, is inching closer to a loan move to Bundesliga club, Hertha Berlin after suspending his contract with CSKA Moscow.

CSKA announced that Ejuke is set to join the Capital club after triggering the employment rules approved by the Federation of International Football Association (FIFA) council.

Ejuke’s contract with CSKA Moscow has now been suspended until June 30, 2023.

“PFC CSKA regrets the players’ decision, which was taken despite club’s effort and their contract duties. As was announced earlier, PFC CSKA plans to fill in lawsuits to defend its interests against FIFA’s decision, which we consider discriminatory and contrary to the statutes of that organisation,” reads a statement on the club’s official website.

The talented winger linked up with the Russian club on a four-year contract in August 2022 after severing ties with the Dutch side, SC Heerenveen.

He has made 55 appearances for CSKA and scored 10 goals.