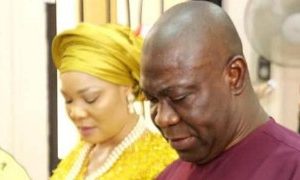 DAILY POST recalls that the Senator is currently being held in the United Kingdom, alongside his wife, over alleged organ harvesting.

During plenary earlier in the week, both chambers of the National Assembly had also declared their support for Ekweremadu, with the Senate sending a delegation to visit their colleague in detention.

In a statement made available to DAILY POST on Thursday, Ekweremadu’s Mpu kinsmen said they were with him in his moment of trial.

His kinsmen said in the statement that, “We, the Mpu Town Union Federated, Traditional rulers of four Autonomous Communities, Elders-in-Council and the good people of Mpu, appeal to the Federal government, the Economic Community of West African States, ECOWAS, International Parliament for Tolerance and Peace, the Nigeria Senate, Ohanaeze Ndigbo and the Christian Association of Nigeria, CAN, to call on the the British authority to be fair, just, reasonable and diligent in the conduct of their investigations on the case.

“Undoubtedly, Senator Ike Ekweremadu, CFR, the former Speaker of ECOWAS Parliament and 3 time Deputy President of the Senate has contributed immensely and is still contributing to the development of our dear country and Africa at large.

“Ike at different fora have promoted the course of education, health and global issues and have diligently been discharging his responsibilities to uplift humanity, since his childhood.
“For instance, responding to the ongoing Russia/Ukraine crisis at the International Tolerance Co-existence Conference held at the United Arab Emirates in Abu Dhabi, Senator Ekweremadu said: ‘I urged communities and nation’s to embrace peaceful resolution of issues as armed conflicts come at grave cost to all sides involved and even beyond’.

“We wish to use this medium to plead with our fellow Nigerians not to pass a hasty judgment against such a man and his family as the whole saga represents a human tragedy involving parents and their sick child which could happen to anybody, irrespective of position.

“On the emerging evidence so far, we ask that the intention of the Ekweremadus should override, if there is any procedural error.

“We stand with Senator Ekweremadu in this trial moment and call on members of the public with different shades of opinion and anxieties to remain calm and allow justice to prevail, for our son we know, will NOT traffic a minor for organ harvesting.

“We suggest that a diplomatic solution could be of good help in the matter. We pray for the quick recovery of our daughter, Chinonso Sonnia Ekweremadu.”