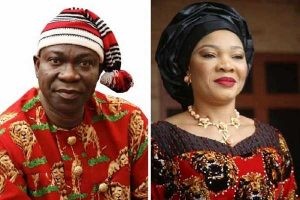 HMP Bronzefield is an adult and young offender female prison located on the outskirts of Ashford in Surrey, England.

It has been revealed that Beatrice, wife of ex-Deputy Senate President, Ike Ekweremadu is being held in the largest prison in Europe.

The revelation was made in a report by Sahara Reporters.

According to the report, Beatrice is being held at HMP Bronzefield prison in the United Kingdom.

HMP Bronzefield is an adult and young offender female prison located on the outskirts of Ashford in Surrey, England.

Bronzefield is the only purpose-built private prison solely for women in the UK, and is the largest female prison in Europe.

The prison is operated by Sodexo Justice Services.

According to Sodexo Justice Services, the facility accommodates 572 women and comprises four house blocks housing approximately 130 women on each one.

“Each wing has a servery unit for women to collect their food which they can choose to eat together on the wing or take back to their cells. We provide telephones in each room which is integral in helping women to maintain their family ties,” the services said on its website.