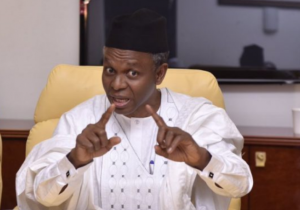 Kaduna State Governor, Nasir El-Rufai has commended security agencies for mounting a sustained offensive against terrorists, kidnappers and other criminals in the state.

The governor made the commendation on Wednesday in Kaduna while declaring open the 4th edition of the Kaduna Book and Art Festival.

“In the last six weeks there has been improved offensive operation against criminals and we are confident if it is sustained, people can drive comfortably without any security or taking of the train to Kaduna,” he said.

He thanked organisers of the festival for coming to Kaduna to hold the event, in spite of “what people say about the state”.

El-Rufai added that his vision was to ensure that Kaduna remained a place where everyone feels at home, with no provision for indigene, tribe or religion.