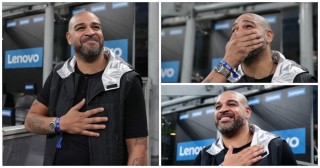 Legendary Brazil forward Adriano Leite was in attendance as his former side Inter Milan recorded a 3-0 thrashing of their city rivals AC Milan on Tuesday. A first-half double from Lautaro Martinez and a Robin Gosens second-half strike secured the victory as the Nerazzuris reached the final of the Coppa Italia. In attendance was former Brazil attacker Adriano who was Inter Milan’s special guest for the Milan derby.

In a video posted on Twitter, spotted by Sports Brief, Adriano, who had a nickname ‘The Emperor’ during his Inter days, was reduced to tears after the stadium met him with an incredible ovation.

Adriano scored 74 goals and registered 27 assists in 177 games in across all competitions for Inter, winning four Serie A titles.

Adriano reportedly once spent a staggering £13,000 on 18 babes just in his bid to deal with the disappointment of a failed transfer.

In 2015, the player failed to secure a deal to join French club La Havre and was disappointed that he consoled himself with women He already flew to France in a bid to sign the contract before it fell out at the last minute due to a potential takeover.

Sports Brief earlier reported that Brazilian legend Adriano has sold his £1.2million luxury mansion to stay in a £10,000 per month in a hotel in the country’s capital, Daily Star.

The 39-year-old finally said goodbye to his luxury home and opted to live in the presidential suite of the Grand Hyatt Hotel It is understood that the former Inter Milan star is paying £10,000 per month to stay at the luxurious Rio de Janeiro hotel. Source: