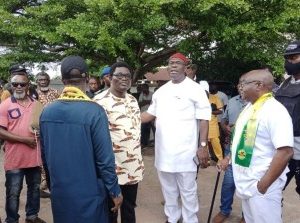 One of the contestants for the All Progressives Grand Alliance, APGA governorship ticket in Abia State, Etigwe Uwa SAN has approached the Federal High Court sitting in Umuahia, capital of Abia State, urging it to declare him winner of the party’s primary election held on 29th May, 2022.

Uwa wants the court to determine the authentic governorship candidate of the party as a result of the two parallel governorship primary elections held on Sunday, May 29, 2022.

In one of the factional elections, Etigwe Uwa had polled 148 votes only second to Greg Ibe who polled 283 votes, while Ijioma Ijioma got 36 and Sir Chikwendu Udensi got 12 votes.

In an application in suit number FHC/UM/CS/100/2022, seeking to be joined as the 7th defendant in a matter between Chief Udensi and APGA, INEC and four others, Uwa had applied to the court seeking to be joined in a suit filed by Udensi who polled the least number of votes following outcome of the primary election.

Uwa, the applicant, said he took part in the said primary election and was declared the first runner up whilst the Plaintiff, Udensi, came 4th but failed to join him in the suit.

The court has however held that the reliefs sought by plaintiff are prejudicial to the applicant’s rights and interests as the candidate that polled the second highest votes.

The applicant has sought an order of Court to grant leave to the party to allow him join as defendant and be declared as winner of the said election.

The application for joinder is supported by a seven-paragraph affidavit duly deposed to by one Mr Samuel Nwokocha, a clerk in the office of Uche S. Awa, lead counsel in the matter.