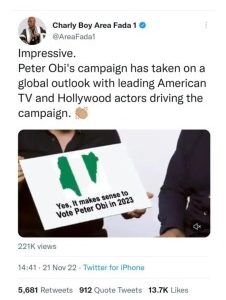 A viral post on social media claims that leading Hollywood celebrities have endorsed Peter Obi, the presidential flagbearer of the Labour Party (LP), ahead of the 2023 elections.

Charles Oputa, also known as “Charly Boy” shared the video via his verified Twitter handle, @AreaFada1, to his 157k followers on Monday.

Charly Boy is a singer, songwriter, television presenter, actor, publisher, and producer. He is well known for his alternative lifestyle and political views.

In the video posted on his Twitter page, which has now been deleted, some Hollywood actors and celebrities held a whiteboard which reads
yes it makes sense to vote Peter Obi in 2023”.

TheCable subjected the video to analysis on Invid, a video verification platform, to ascertain the validity of the video.

A keyframe analysis of the video was further subjected to Google reverse image search. The result of the analysis led to wired.com and laughingsquid.com, where we found the original video which was doctored to mislead social media users.

Checks by TheCable revealed that some of the clips from the original videos have been existing on the internet as far back as 2016.

Further search revealed that the doctored video posted by Charly Boy was cut out from different footage from Wired Autocomplete series, an interview session, where celebrities answer the most commonly searched questions about them on the web.

Ice Cube’s edition was first uploaded on April 11 2016, while Idris Elba and Matthew McConaughey’s edition of answering questions from the web was uploaded on August 2, 2017.

The other celebrities had theirs uploaded subsequently while other videos were taken from various other sources.

A look through Charly Boy’s Twitter account also revealed that he is an ardent supporter of the LP presidential candidate.

Replying to the comments, the singer said there was nothing wrong since other presidential candidates are never interested in the truth.

“I can’t believe that some mumu paid trolls will come on my page to be telling me what video is fake or true. Like the people they are supporting have ever been interested in anytin truthful or wanting to do good,” he tweeted.