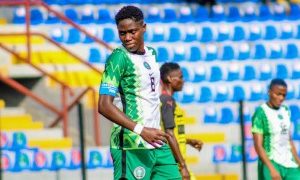 Fans on Monday took to social media to criticise Super Falcons forward Asisat Oshoala after their 2-1 defeat to perennial rivals South Africa at the ongoing 2022 Women’s Africa Cup of Nations in Rabat, Morocco.

Some of the fans pointed out that she was too slow, while others said she just didn’t give enough.

Nigeria’s quest for a 10th title began on a shaky note with the defeat in the Falcons Group C opener at the Prince Heritier Moulay El Hassan stadium, Rabat.

The Falcons came into the game against South Africa as favourites, but they were on the back foot all through.

Two quick second half goals from Jermaine Seoposenwe and Hilda Magaia in two minutes handed the South Africans their fourth-ever win over the Falcons.

A 92nd minute goal by striker Rasheedat Ajibade proved a mere consolation, as Banyana claimed their third win in their last four meetings with the Falcons.

But fans felt Oshoala, who looked isolated upfront before she was taken off in the 82nd minute following an injury she sustained in the first half, wasn’t at her best in the encounter.

A user @Buchi_Laba asked for the Pichichi winner to be subbed off early “Asisat cannot run!! Take her out! The earlier the better.”

Akpan Joseph felt Oshoala was not giving her all and was explicit in his criticism, “Asisat should come down her high horses and play for the falcons or fxck off, missing chances like she doesn’t care and what’s with the runs like a 59years old woman.”

Another user @mighty_mightty added, “Asisat still forming bossy in the pitch, the hunger to win is not there, I give credit to Alozie and Plumptre.”

Dwight Shrute wrote, “Asisat is too proud. Drop shoulder and play ball no be twitter be this abeg.”

David Peter believed the 27-year-old didn’t give her all and criticized the general performance of the team, “Asisat needs to do better, this is AFCON and not a friendly game. Ashleigh needs to improve she w as caught off position many tines and didn’t recover quickly enough. Super Falcons should try building from the back and our midfielders should stop playing like Fred and McTominay”

A couple of users also believes the forward is overrated.

@abeembohlah said, “Truth be told, Asisat Oshoala is TOO overrated.”

“Imagine. The best player on the Pitch for the Nigerian Women has been the white girl, Ashleigh. Asisat Oshoala is overrated.”

However, some other fans defended Oshoala and instead, put the blame on the entire team.

Olanike oluwadamilola said, “No Asisat Oshoala slander will be tolerated today…. No single playmaker in this team… No pattern nothing nothing omo I tire oooo.”

David Ben added, “This isn’t entirely on Asisat Oshoala, the entire team play has been awful. It’s not always about her. The goalkeeper has been rusty. Super Falcons are just not falconing today. It’s been a while I saw them play this poor regardless of who #BayanaBayana are #WAFCON #NGARSA.”