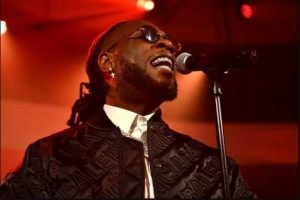 Indeed, the grand finale of the three-day Afronation festival that was held on Sunday night with an electrifying performance from grammy-winning Nigerian singer, Burna Boy.

Referred to as the world’s biggest Afrobeats festival, this year’s event which was held in Portugal began on Friday night with Davido as the headliner.

Superstar Wizkid headlined the second day of the event, where he declared his love for Davido and Burna Boy.

Following Burna Boy’s performance at the finale, fans have celebrated the singer for his musical prowess and electrifying performance.

Basketball star, Giannis Antetokounmpo, who shared a clip of the performance on his Instagram story said, “He’s the GOAT (Greatest of all times) Carry on, fellas.”

Fans on Twitter noted that Burna Boy gave an impressive performance to end the show, adding that the shoe organisers saved the best for last.

A fan @ritascuriousity, said, “Burna Boy was such a great ending to Afronation Portugal 2022. The energy was burning!”

Another fan, @benny7gang tweeted, “Burna Boy closes Afronation with a big bang as he performs ‘Last Last’ live. They saved the best for the last! he’s obviously the HIGHLIGHT!”

“You can’t complain about the sound when you are the sound. Burna Boy shut down Afronation,” @CallMeKhalipha noted.

Nigerian singers, Rema and Omah Lay, who performed on the first day of the event had complained about the sound setup of the show.

The duo was referring to a backlash from an attendee who knocked the singers after she claimed that she didn’t hear them sing during their performances.

Rema had noted that the sound was “bad” during his performance, as he faulted the organisers for not providing adequate sound system at the event.