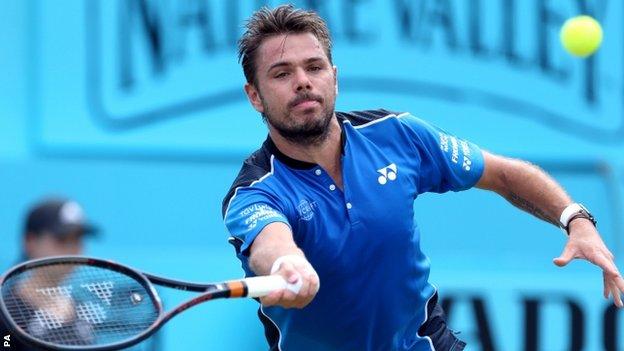 Stan Wawrinka failed to convert 12 break points as he lost to Sam Querrey in the second round of the Fever-Tree Championships at Queen’s.

Wawrinka, a three-time Grand Slam champion, wasted seven set points at 5-4 in the first set and only capitalised on one of 13 break points in the match.

Querrey dominated on serve, hitting 25 aces as he closed out victory.

It was a battle of the big servers as the pair delivered 36 aces between them, with Cilic edging Muller 19-17.

Seventh seed Kei Nishikori was also knocked out, with Russia’s Karen Khachanov beating the Japanese player 6-2 6-2 to go through to the quarter-finals.

Khachanov, who reached the fourth round at this year’s French Open, will next face Roberto Bautista Agut after the Spanish fourth seed beat Dutchman Robin Haase 4-6 7-5 6-4.

The top seed in Halle is Swiss eight-time Wimbledon champion Roger Federer, who plays Frenchman Benoit Paire on Thursday for a place in the last eight.