]A former Head of State, Muhammadu Buhari, on Wednesday, praised the courage of the Speaker of the House of Representatives, Aminu Tambuwal, for defecting to the All Progressives Congress, APC, despite the odds stacked against him.

He said the Speaker did not only take a risk by dumping the ruling Peoples Democratic Party, PDP, to join the opposition APC, but also strategically adjourning the House till December apparently to douse tension.

Speaking when he and three other presidential aspirants on the platform of the APC, were presented to the delegates to the party’s extra-ordinary convention of the party in Abuja, Mr. Buhari said he was overwhelmed by Mr. Tambuwal’s action.

“We will like to thank Alhaji Aminu Tambuwal for what he did yesterday. We were overwhelmed,” the former head of state said. “And it was only yesterday I admit that I ask what profession is he and I was told he was a lawyer, I say no wonder.

“Taking such a remarkable risk and sending everybody on holidays till December is an achievement. By now we will be sounding like a broken record about the objective of the APC. Our intention God willing is to secure this country and to efficiently mend it. So God help us.”

The presidential aspirant congratulated the four parties that fused into APC, noting that as early as 2005, it was realised that to be able to beat the ruling PDP, the leadership of the opposition parties needed to come together.

He congratulated the parties for the successful merger. 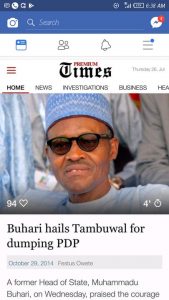