The 2019 battle between President Muhammadu Buhari and his former boss, ex-president Olusegun Obasanjo, might have taken an international dimension as the former President is set to take the battle to foreign lands, beginning with South Africa today. Indications to that effect emerged yesterday when Saturday Telegraph gathered that Obasanjo, barring any last minute change of plans, has concluded plans to hold a meeting with some Nigerians and foreigners in Johannesburg today.

Sources close to the former president told Saturday Telegraph that Obasanjo has also commenced high-level talks with some institutions in the United States, partnering with the Jimmy Carter Foundation and other lobby groups to checkmate the return of Buhari. The groups, according to sources, are to be used in mounting pressure on international donors to prevail on Buhari not to seek second term in office. 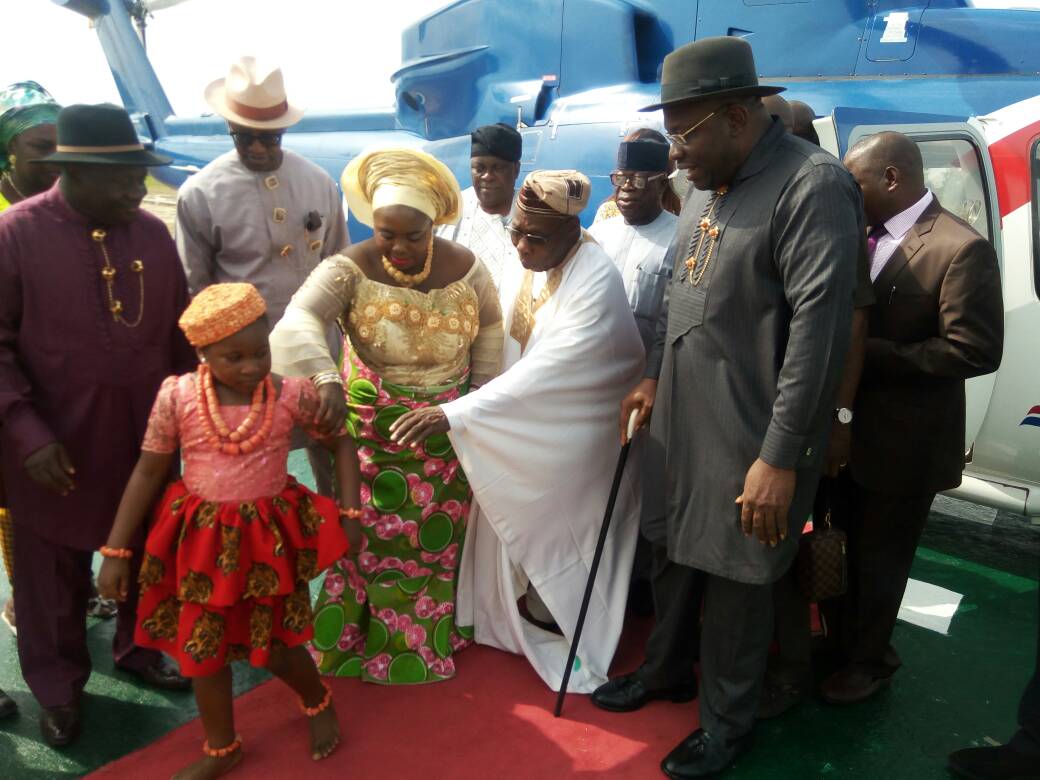 “Baba will be in South Africa on Saturday (today), from there, it is possible that he may move to the US. It is not certain but definitely he is taking the campaign against Buhari outside the shores of Nigeria,” a source said. However, Saturday Telegraph has gathered that in the midst of the international politicking, about 25 retired Generals have thrown their weight behind Obasanjo in his quest to upstage Buhari and the All Progressives Congress (APC) administration as well as enthrone another government in 2019.

Feelers to this end emerged on Thursday after the former president registered as a member of the Coalition for Nigeria (CN), a movement Obasanjo kick-started after his open letter to Buhari on state of the nation. But the National Leader of the APC, Senator Bola Tinubu is not leaving anything to chance as he joined a Senior Advocate of Nigeria (SAN), Chief Femi Falana, yesterday to carpet Obasanjo over the open letter to Buhari.

While Tinubu noted that the former president was merely playing politics with the letter, Falana said Obasanjo is as guilty as Buhari on most of the allegations he levelled in his letter. Though Buhari is yet to make public his intention to run for second term, Obasanjo had warned the president against nursing such ambition, faulting the efforts of the present administration in revamping the economy.

Sources within Obasanjo’s camp, who confided in Saturday Telegraph, informed that apart from the former governor of Osun State, Olagunsoye Oyinlola, there are other prominent retired Generals backing the former president. “Do you think Baba works alone, he doesn’t just come out to talk, they must have agreed among themselves. I need not mention those with him but these are big horns that had been in power before.

“They know how to rally the people. They are not just coming together to lead us; they have their followers in the military and across the country. But how they want to resolve among themselves is what we don’t know but I doubt if Buhari will say no to his former bosses”, one of the sources said.

Another source however revealed that the group had scheduled a meeting today in the South West, noting that no fewer than 10 of the retired Generals would attend the parley, meant to take a decision on the likely replacement for Buhari. Though Obasanjo won’t be part of the South West meeting because of an engagement in South Africa, he is said to be aware of the General’s parley. “Baba is not part of the meeting, he is scheduled to be in South Africa but it is possible that he is aware. I am not even sure of where they want to hold their meeting”, he said.

Tinubu, who spoke when he visited Governor Rochas Okorocha in company with the pioneer National Chairman of APC, Chief Bisi Akande, at the Government House Owerri, explained that the former President had several ways of meeting with Buhari and discuss issues but chose to go public.

He added that if the former President had meant well he would have met with Buhari to talk about the issues he raised in the letter since he was senior to Buhari both in the army, and as Head of State and President. “They both have the same background. So, I believe that would have been the conversation of military Heads of State retired.

They have unfettered access to each other either through the Council of States or any other means. He could always see the President privately. I think Obasanjo was playing politics with the public letter. That is all I see. They also met at the African Union meeting too. He has access to discuss with the President any time he wants”. On the coalition, the APC leader stated that the APC would respond at the appropriate time.

Falana, while insisting that Obasanjo’s government instituted the culture of impunity asked the former president to desist from pouring insults on the collective intelligence of Nigerians. Falana also noted that Obasanjo had the opportunity to make the country great by providing good leadership and ridding the polity of corruption but failed woefully while he presided over the affairs of the nation.

“If ex-President Obasanjo who ruled this country for 11 and half years had institutionalised democracy, rule of laws, respect for human rights, we would not be in this mess. We will be having an Eldorado by now”. “Let Obasanjo and others be honest to admit that they brought us to this shameful episode.

So, nobody should grandstand when it comes to the mis-governance of Nigerians. Nobody has apologised. Between 1999 and 2007, this country made close to hundred billion dollars from the sale of one commodity, oil. What is there to show for it rather than permanent darkness? “Obasanjo is entitled to form his own political party or his own movement but he should please desist from insulting the collective intelligence and the collective memories of Nigerians.

In other words, all the other allegations took place under Obasanjo and in fact, he institutionalised the culture of impunity under the democratic dispensation in Nigeria. “Many of us have forgotten the abduction of Governor Chris Ngige, many of us have forgotten the fact that the National Assembly, the House of Representatives displayed bales of naira with which it was alleged that the presidency wanted to bribe the legislators.

“Many of us have forgotten about the third term agenda or the fact that many people were also closed to the seats of power were treated like sacred cows even in the fight against corruption but I do not want to join issues with Obasanjo for now on his letter so that one is not seeing as endorsing impunity in our country. But other than the allegations of nepotism and clannishness which the presidency is notoriously noted for, I think, they are birds of a feather” Falana posited.

In the same vein, a former governor of Edo State, Adams Oshiomhole, yesterday told Obasanjo to mind his business and not comment on Buhari’s re-election. Oshiomhole, who was on a private visit to the President in the Presidential Villa, with the Edo State Governor, Mr. Godwin Obaseki said as an APC activist and loyalist, he was in the villa to reassure Buhari of his absolute and total support for his government and even for 2019 elections. “I am not sure when I see the list of the advisers that Obasanjo is one of them.

But I also recall with respect that the day Obasanjo was swearing in some of his advisers, he did say that anybody who is his adviser could advise him, he will make his own decisions. And I think that principle still stands. “I think that in moments like this nobody should seat on the fence. Our country has challenges and there are huge temptations here and there and it is important he knows that he has men and women who even at this hour have huge confidence in his leadership ability.

“Everything taken to account I believe that every Nigerian who wants us to sustain some of the renewed vigour to deal with one of the most challenging problem that Nigeria has faced, namely corruption and things like that, you cannot but appreciate the president and all that has done under his leadership this past two years and some months.

“I think that people have to realise that the amount of damage done by the previous governments, you know when people say no blame game maybe yes, maybe no. But where I come from, people say that is only a fool who will be working in the road, get into a pothole and fall and then get up and continue the journey, go to the hospital and treat himself.

However, mix reactions are trailing the formation of the CN. While some youths have seen it as nothing “but an exercise in futility”, the Northern Youth Democratic Champions (NYDC) believes that the CN is a right step in the right direction.

As far as the group is concerned, the Buhari government has “failed”, to impact on the lives of the common people. According to the President of the Youth Democratic Forces (YDF), Comrade Ibrahim Shehu: “We have lost confidence in Buhari based on the fact that this government that enjoyed our popular votes could do anything for us in the last three years or so of its stewardship.

“We elected Buhari believing to see a complete different stroke in governance, but we ended up having some people hijacking the same government while the president seems not to care. This is in spite of heavy outcry that he should do away with some persons but to our disappointment they are still there”.

But some other youth groups, such as the Northern Think Tanks Awareness, Northern Youth Movement for the Realisation of Good Governance and the North Must Grow Youth Movement, have thrown their weight in support of President Buhari, giving the administration credit in the area of security, youth employment, infrastructural development and agricultural revamping.

Coordinator of Think Tanks Awareness group, Comrade Sani Niya, said: “History will never forget the fact that before the coming of the Buhari government, the dreaded Boko Haram insurgents had almost overran the entire North and Abuja, with bombings here and there, but today, all those ugly trend are things of the past.”

On his part, Mr. Danladi Doctor of the North Must Grow Youth Movement, said anybody who thinks that the last three years of the Buhari government could correct the devastated economic, social and security damages done to the nation, is simply unfair.

“That is why to us, even the Obasanjo’s third force coalition is dead on arrival because he cannot convince us against a true nationalist and patriotic Buhari. “In fact, let me ask Obasanjo what he did as Nigerian President in the area of security, economy and infrastructural development in his eight uninterrupted years?

Toeing same line, the Secretary of the Northern Realisation Group, Tijjani Nababa said: “How many billions of tax payers’ money had gone down the drain in the power sector and for road development? Nothing to show for it during his reign. “But today, look at the works that are going on, almost all over the nation, look at agricultural development, look at security improvement, look at the foreign reserve. For the first time in Nigeria, despite passing through recession, the reserve is inching towards over $60 billion.

“Therefore to us, our future had been taken care of and we are safe in the hands of Buhari while Obasanjo and his third force coalition should go.”