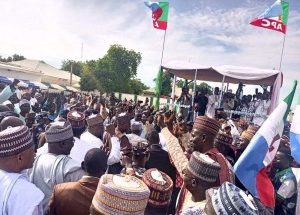 A former Chairman of the People’s Democratic Party (PDP) in Yobe State, Alhaji Abbagana Tata, along with 1,051 party officials from ward to state levels, have dumped the party for the ruling All Progressives Congress (APC).

The former PDP stalwart said he and thousands of PDP members joined the APC in appreciation of the remarkable achievements made by Governor Mai Mala Buni-led administration.

“We are joining the APC to support the Buni government to build our dear state, we will support the government and the party in the efforts to move Yobe state forward.

“I want to assure our collective loyalty to His Excellency Governor Mai Mala Buni, the leadership of APC and the Yobe state government” Abbagana assured.

Receiving the former PDP stalwarts, Governor Buni, commended the defectors for the courage and love they have for the state.

“I am happy your defection is driven by patriotism and appreciation of the APC administration to which you now belong,” he said.

According to the Governor, Abbagana Tata is a principled and self-accomplished politician who cannot be materially lured to abandon his party for another.

“I am therefore grateful that such principled politicians are convinced by our modest achievements to join the party.

“We ran futuristic policies and programmes for a prosperous future for our people.

“We will continue to remain development oriented to improve the lives of our good people” Governor Buni assured.

He called on party members to open more space for those moving from other parties to the APC.

“We have enough space to accommodate everyone with equal opportunities,” he said.

The Governor said the new members will henceforth enjoy equal rights and opportunities like older members of the party. 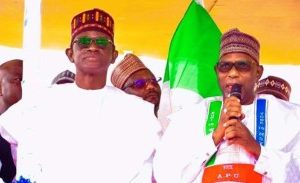