France and its allies in the Barkhane and Takuba anti-jihadist operations in Mali on Thursday announced a “coordinated withdrawal” of their forces due to “multiple obstructions” by its ruling military junta. 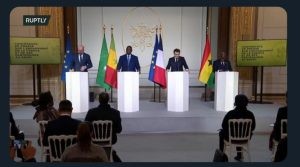 In a joint statement, Paris as well as other EU nations and Canada vowed to pursue “joint action against terrorism in the Sahel region, including in Niger and in the Gulf of Guinea” by June 2022.

“Due to multiple obstructions by the Malian transitional authorities, Canada and the European States operating alongside Operation Barkhane and within the Task Force Takuba deem that the political, operational and legal conditions are no longer met to effectively continue their current military engagement in the fight against terrorism in Mali,” the statement said.

The allies therefore “decided to commence the coordinated withdrawal of their respective military resources dedicated to these operations from Malian territory.”

As France and its partners have announced the start of a military pull out of Mali after a decade of anti-jihadist operations there, President Emmanuel Macron on Friday said Niger had agreed to host European forces fighting Islamist militants.

He also said the remaining forces would provide further assistance for countries in the Gulf of Guinea.

“These states are increasingly exposed to efforts by terrorist groups to implant themselves in their territory,” Macron told a press conference in Paris.