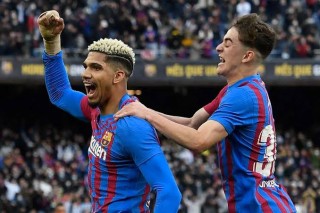 Barcelona coach Xavi has urged the board not to make any attempt to sell the duo of Gavi and Ronald Araujo this summer.

The pair are locked in new contract talks with Barca.

Xavi made it clear what his opinion on Gavi and Araujo’s future is. He wants them signed up for years to come.

“They are very important. The club cannot allow either of them to leave.

“They are transcendent footballers. I think their renewals are a matter of time. I want to think that the two of them will stay and reach an agreement with the club. I’m optimistic.”

Both players are contracted until 2023, so there is still plenty of time to tie the duo down to long-term deals.