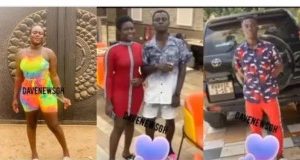 The Latest News, which is spreading like wildfire, indicates that a TikTok personality named Nana Yaa was shot dead by her wealthy boyfriend, NaijaCover Reports.

According to a close friend of the woman, Nana Yaa has a child with her boyfriend, and they used to live together, but problems arose, and Nana Yaa relocated to her mother’s home with her child.

Nana Yaa’s boyfriend called her last week and asked her to come home and get some money for their child, so she did, NaijaCover Learnt.

When she arrived, she didn’t see the guy in the house, so she went room by room looking for him.

Details indicate that because the man is wealthy, he lives in a large house with many rooms. So “Nana Yaa” went room by room until he came to one that, according to the narrator, is a room where Nana Yaa’s boyfriend performs his Money Rituals “Sakawa.”

In Shock, Nana Yaa grabbed her phone and began recording everything her eyes saw.

Unfortunately for her, her boyfriend caught her in the act and mercilessly gunned her down.

According To Sources, the man also committed suicide on the spot after photographing what he did to his girlfriend and sending it to his brother.