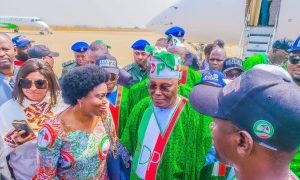 IgbereTV correspondent monitoring the event which is ongoing did not not see Makinde at the event and also the National Assembly candidates of the party in the state were not in attendance at campaign ground.

Osun State Governor Ademola Adeleke is expected to lead PDP governorship candidates in Lagos and Ogun to the event.


It was further learnt that Makinde had not gotten signal from the leader of the aggrieved party’s governors known as G-5 led by Governor Nyesom Wike of Rivers State to attend the event.

Unlike when the G-5 Governors visited Ibadan a few days ago, there was nothing welcoming Atiku and the PDP leaders to Ibadan.


Also, the decoration of Mapo Hall, venue of the event, and other logistics were not being handled by the Makinde administration.


Makinde and four other governors of Rivers, Benue, Abia and Enugu were not disposed to the campaign of the former vice-president following his insistence that the party chairman, Iyorchia Ayu would not vacate his seat as national chairman of the PDP.