Group Threatens 7-Day Protest If NNPC Boss, Kyari Does Not Resign Within One Week 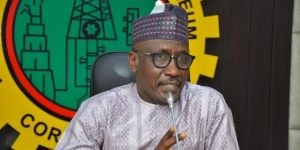 The Coalition for Transparency, an anti-corruption group, has asked Mele Kyari to resign.

The group issued an ultimatum to Mele Kyari, the Group Chief Executive Officer of the Nigerian National Petroleum Company Limited (NNPC Ltd) to resign honourably now or be forced to do so.

In a statement signed by Comrade Augustine Adie, the group faulted the appointment of the CEO in Nigeria’s Oil and Gas Sector, noting that it didn’t follow the due process of law.

The NNPC recently officially transitioned to a private entity that would be regulated in line with the provisions of the Companies and Allied Matters Act (CAMA) in line with the Petroleum Industry Act (PIA) 2021.

As a commercial entity, NNPC Ltd will no longer have recourse to state funds. Its share and assets, including oil blocs and refineries, are now held by the ministries of petroleum and finance.

NNPC Ltd will also operate joint production ventures with Western oil majors but anti-corruption campaigners have long asked for the company to be more transparent, calling for the publication of its crude contracts and a statement of accounts.

According to the statement released on Friday, Adie said it was expected that upon the implementation of the PIB Act that a serious-minded government would appoint credible and transparent individuals to supervise the industry.

He said it’s unfortunate that the same Kyari who allegedly shortchanged every Nigerian through under-remittance to the federation account, has been appointed to head the industry.

The group, therefore, gave him a one-week ultimatum to resign and go home or face mass action.

Adie said that the EndSARS protest of 2020 is nothing compared to what is being planned by Nigerians if the embattled NNPC boss remains in office.

He noted that Kyari has so far failed in his mandate and should have resigned honourably long ago.

“In sane countries where the leaders are bound by accountability, and corruption is not celebrated and rewarded; where the leaders do not ride rough-shod on their citizens, Mele Kolo Kyari ought to have either resigned by now or shown the way out,” Adie said.

“That he has been allowed to continue to sit on the mess he has made of Nigeria and Nigerians, even rewarded with a new portfolio, tells a lot about the level that Nigeria has sunk in the cesspit of infamy.

“Some time ago, Kyari told the nation that the fuel imported is not tested for methanol. Yet in other countries that import petroleum products, every product import must undergo the critical test for quality, checking the percentage of the various chemical content of the product. This is the pre-condition for discharge and acceptance by the importing country. Yet Kyari has continued to talk about this and other lapses with impunity.

“There are a good number of internal crime syndicates threatening to push its agenda of ridiculing Nigeria on the global stage. In 2021 NNPC conducted a controversial bid for the sale of a N3 billion consignment of slop oil. A couple of years ago, an oil trading company, Samano Sa De CV, wrote a letter to Kyari, demanding a five per cent reward for exposing the diversion and theft of 48 million barrels of crude oil. There’s also the unresolved subsidy scam.

“We have had enough as a nation. It is time for Kyari to walk away or we will force him to do so. Nigerians are fed up. We have mobilised millions of patriotic citizens to carry out massive protests across the country. We will be on the streets for seven days and potentially remain there if Kyari continues at NNPC.”