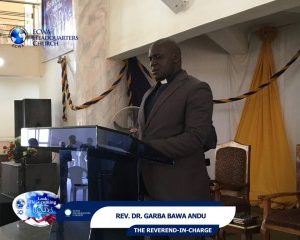 Residents of Jos have lamented the sad state of insecurity in Plateau state after gunmen abducted the wife of Reverend Garba Andu Bawa.

Bawa is the pastor in charge of Evangelical Church of Winning All (ECWA) headquarters in Jos, Plateau State.

A report by Nigerian Tribune revealed that the gunmen at about 1:24 am on Monday, July 4, stormed an area called ECWA Staff in Jos North local government area of the state where the cleric and his family live.

The gunmen fired several gunshots into the air before they forced themselves into the Reverend’s house but while trying to force him out of the house, he engaged them and in the process managed to escape.

A source close disclosed that after the Reverend escaped, the gunmen searched the house and found his wife where she was hiding and whisked her away to an unknown destination.

The source also disclosed that the gunmen contacted the family at about 8:50 am on Monday demanding a ransom of N50 million.

A resident of the area told the publication that the community is under siege by kidnappers and armed robbers.

“Living in this place has become a nightmare, attack on this community has become daily occurrences, and most residents cannot go to sleep with their two eyes closed. We have engaged vigilantes and taken other security measures yet these elements keep having their ways.” he said.