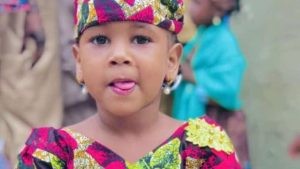 Abdulsalam Abubakar, the father of five-year-old schoolgirl, Hanifa, who was killed by her school proprietor, has visited journalists to show appreciation.

The man on Friday paid a ‘thank you’ visit to the Kano Nigerian Union of Journalists Secretariat for the roles the media played in the speedy dispensation of justice for his late daughter.

He stated that the role the media played in ensuring quick dispensation of justice against the killers of his daughter was unquantifiable.

“The media stood firm in ensuring the speedy dispensation of justice, during the entire due process trial, as the killers were accordingly found guilty, as charged and judgment accurately delivered against the accused.

Abubakar said, “I think words were not enough to thank Nigerian journalists for sustaining the coverage of the gruesome murder of my daughter from the day she was killed to the day judgment was delivered.

”It will linger in us for  a  pretty long time what you have done to me and my family, and will only add, may Allah reward you abundantly for discharging your official responsibilities. My mission at the Press Centre is to sincerely thank journalists for their role in ensuring that the killers of my daughter were apprehended to face the music.’’

He stated that an enduring relationship with the media had been established, adding that God willing, it would be sustained.