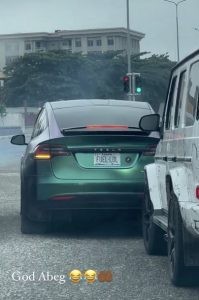 Tesla is a brand of electric car which doesn’t use petrol but is propelled by one or more electric motors, using energy stored in batteries.

The number plate of the Tesla car seen in Lagos read “Fuel LOL”.

Twitter user @AdeyemiDavid_ shared the photo with the caption;