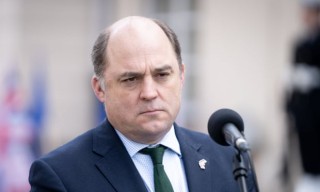 An inquiry has been launched after an apparent hoax caller claiming to be the Ukrainian prime minister, Denys Shmyhal, was able to get through and speak directly to the defence secretary, Ben Wallace.

After Wallace revealed news of the call on Thursday, Priti Patel said something similar had happened to her earlier in the week. Both government ministers expressed solidarity with Ukraine.

A defence source told the Reuters news agency Wallace had ordered an immediate inquiry to find out how the apparent impostor was able to speak to him. The incident raises security questions, particularly as Wallace suggested that Russia was behind the effort.

The shadow Home Office minister, Holly Lynch, said: “For individuals to be able to fraudulently gain access to two of the most senior government ministers with responsibilities for our national defence is worrying.

“There are questions that need answering as to why the basics in due diligence appear not to have happened, especially at a time of heightened security concerns around disinformation and cyberattacks.

“An urgent investigation must look into how this happened so the necessary steps can be taken to avoid anymore such incidents.”

Wallace is not the first British minister to fall foul of a hoax call. In May 2018, Boris Johnson – then the foreign secretary – talked about international relations and rude poetry with a hoax caller who pretended to be the Armenian prime minister.

And, in 2015, it emerged that the authorities had been the target of two hoax calls. In one, an impostor claiming to be the head of GCHQ Robert Hannigan managed to get through to the then prime minister David Cameron on his mobile. In the other, a caller rang GCHQ and managed to obtain Hannigan’s mobile phone number.

A government spokesperson said at the time that departments had been told to be more careful and that such incidents were taken seriously. Cameron, however, seemed less disturbed, recounting the story in lighthearted fashion during a pre-election visit to the Liberal Democrat-held marginal seat of Eastleigh in Hampshire.

Explaining how he had rumbled the hoax caller, he said: “My BlackBerry went in my pocket, I answered it and it claimed to be a conference call established, which I do very frequently, between the head of GCHQ and some of the staff in my office. A voice came through, a voice I didn’t recognise. The voice said that he was sorry to wake me up which I thought was strange as it was 11am.”