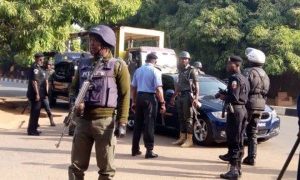 Daily Post reports that the convoy of Bolanle Jimoh has been attacked.

It was serious that took over on Tuesday as the convoy of Bolanle Jimoh, who is the Caretaker Chairman of Osogbo South Local Council Development Authority at the Isale Osun area of Osogbo was attacked.

Also affected in the attack were members of the All Progressives Congress (APC) who were part of the convoy.

DAILY POST gathered that the attack occurred while Jimoh and the APC members were going on their routine campaign for the re-election of the state governor, Adegboyega Oyetola.

They were reportedly ambushed by assailants wielding cutlass and guns.

The branded Sienna space bus belonging to the Caretaker Chairman was vandalised.

Reports also have it that the Osun Amotekun office in Osogbo Local Government and its personnel were also attacked while trying to rescue the chairman in the hands of the hoodlums.

As of the time of filing this report, the identities of the hoodlums are yet to be ascertained.